Seventeen things I've learned from having a puppy for lo these six days.

Although I have long been a crazy dog lady, I have never had a puppy until Walter the Wonderdoodle came into our home just a few days ago. He is the bestest, cutest, smartest pup on the planet and has already taught me many things.

1. Toilets are AMAZING. They offer a rich bouquet of fragrances and we should all strive to get as close to that olfactory palette as possible. This includes - but is not limited to - trying to climb inside the toilet.

2. It is possible to get stuck behind the toilet.

3. If you should get stuck behind the toilet, scream like you are being actively mauled by a bear. If you can do this in the dark to further confuse your pack, all the better.
4. It is possible to get inside a dishwasher.

5. Schedule bringing home a new pup to coincide with the delivery of nine cubic yards of mulch. The newest family member understands each and every wood chip deserves to be chewed and perhaps even carried inside.

7. Mulch does not match our interior design.

8. It is impossible to pee outside while surrounded by fresh mulch. There are too many smells.
9. Earrings are made for chewing.

11. And that sweater with the fringy stuff on it.

12. Also the quilt grandma made.

13. Water tastes better out of someone else's glass. It is worth scaling a side table to reach.
14. It is a true CRISIS when all members of the pack are not in the same room. If one of the humans happens to leave the room to go to the bathroom or to get something from the kitchen, there is but one option: scream. Do not stop until everyone is back in the same room, no matter how much the humans might try to soothe you or divert your attention with some sort of inferior, non-human toy.

15. If not having the entire pack in the same room is a crisis, having a pack member in the shower is THE WORST THING THAT'S EVER HAPPENED. You just don't know if or when somebody can come back from that. Screaming and scratching on the shower door is mandatory.

16. Miniature dachshunds are crabby and way too touchy. They snap when you try to tackle them.
17. Being highly malleable and sporting a large puppy belly will allow you to get away with just about anything.
Seriously.
Becky Brown at 4:52 PM 8 comments:
Share

Because I strive to celebrate the absurd and find the humor, I'm going to tell you how it really went down.

I took a long-awaited girls' trip with three of my most wonderful friends. We went to Cancun. They all flew together on a flight that ended up being delayed. I found myself with hours to kill at the Cancun airport.

As I sat down in an airport bar, my phone buzzed. It was my husband, asking if I had landed. Yep. Just ordered a Dos Equis Amber. Then he asked if he could call me later. Huh?

I got it out of him via text. Big Doodle had taken a dramatic turn. My Guy would call me in a bit.

And so I sat in this airport bar where no one spoke English. I tried to keep it together. I thought about how I had said to My Guy the night before, "Listen, I know you think I'm nuts, but if something happens with Big Doodle, don't deal with it by yourself. Call someone. Call Todd or Josh or any of those guys. You don't have to be alone." And he had given me that universal tone that husbands use, that tone that says, "I love you but you're crazy but I love you so I'm gonna pretend I'm totally vested in what you just said." And so I let it be.

But back at the airport bar, I realized I'd said what I said because I'd had a premonition. That giant dog was waiting for me to leave. My mom said he was still alive due to my sheer will. Maybe he was afraid of disappointing me.

My Guy called me. It was sometimes hard to hear him over the blaring Mexican pop music, but he said Big Doodle was in obvious pain and couldn't urinate. He was going to take him to the vet the next day and was calling to ask ... permission.

Of course. Oh, honey. I don't want that dog to suffer for one second. By this time, I had tears streaming down my face. I'm so sorry. I'm so sorry I'm not there.

Also ... he did realize the vet was open late tonight, right?

Oh. He would call them immediately. We hung up. I cried into my beer and realized that cocktail napkins are not at all absorbent. My husband texted to say he was headed to the vet. I put my chin to my chest and tried to be invisible. I was thankful no one was attempting to talk to me. Even the waiter was actively ignoring me.

And then, the Mexican pop music clouds parted. And "Young Turks" by Rod Stewart started playing.

Why? Who is to say? Maybe the people of Cancun really want young hearts to be free tonight. Maybe time really is on their side?

Then, "Celebration" by Kool and the Gang came on. I was aware that it is against NATO and the United Nations and probably the Geneva Convention to cry during "Celebration." So I stopped. And then the Mexican pop music started again.

I went to find my friends.

After an adventure wherein I discovered that I was at the wrong terminal and I got fleeced by a cabbie giving me a ride to the other terminal but I didn't care because I was barely holding it together, I arrived at the proper terminal. I took one look at my friends and started crying. We got in the shuttle van to the resort.

They were kind, but it was late and the ride wasn't short. Everything looked so distorted and not right, and all I could think was, "I hate Mexico. This is the worst. Mexico is the worst." And then my phone rang.

It was my darling husband. He was crying. I started crying. He told me about our sweet, geriatric boy, about how tests had suggested the cancer had spread from his bladder to his kidneys and liver. He said it was the right thing to do, that our boy was so tired and ready to go. My Guy held our pup as he crossed over.

I apologized to him for making him do this by himself. He apologized to me that it happened while I was gone. We both cried and apologized. And then my van pulled up to a very nice resort.

I got off the phone, got out of the van, and sobbed. My friends put their arms around me and made sure our luggage was unloaded and everything was OK-ish. I felt like all the skin was peeling off my face.

And then? Then, I realized that the bellhops and concierges who had initially greeted our shuttle had scattered. I had noticed the looks they exchanged. Friends, I'm here to tell you that men's reactions to women who are sobbing is universal. There is no language barrier here. They all panic and gladly run in the other direction.

Finally, the greeters drew straws and the loser timidly came out of hiding to offer us scary blue champagne. He tried not to make eye contact. Since I figured I looked like that guy from "Mask," I couldn't blame him. I had stopped crying, but I was clearly hideous.

The first two days, I was just exhausted and sad. By day three, I was starting to feel a bit more human. An all-inclusive resort didn't hurt, nor did time with my friends on the beach and by the pool.

It all got real when I got home. My Guy had moved the giant dog beds out of every room. Lil' Frankfurter greeted me like he'd never expected to see me again. And then I spent about a week thinking I'd forgotten to let Big Doodle inside, like he was still in the backyard, chilling in the shrub where he liked to lounge while surveying his domain.

Grief is crazy. The flavors are endless. This particular grief is tempered by knowing that we had been on borrowed time for quite a while. It's sadness and relief and loneliness for a very, very good dog.

I decided I don't hate Mexico. Much.
Becky Brown at 3:50 PM 7 comments:
Share

The joke is that I had to marry my husband because I fell in love with his dog.
It's funny because it's true. Or partly true. I love my husband. But that gigantic man-dog labradoodle of his? Well, we fell hard and fast.

On our very first date, My Guy and I met to walk his two labradoodles. I walked Big Doodle and I was astounded by this Hyundai-sized furball. He was a perfect gentleman.

A few months later and our relationship had progressed to such a point that one night when I stopped by My Guy's house, Big Doodle did what can only be described as "losing his shit." He was so excited to see me that he jumped up and down, squealed, brushed up against me, and cried. I ended up sitting on the floor of the kitchen while my 80-pound loverboy sat in my lap and licked my hair, still squealing.
Whenever I'm feeling sad, I think about that. Sure, I might be (fill in the blank with horrible thing du jour), but a dog loves me that much. And I love him right back.

It's hard to see someone you love decline. But My Guy and I have been doing just that for a while now. Big Doodle was diagnosed with bladder cancer in the summer of 2015. And he hasn't had any hip sockets to speak of for, well, a long time. But always, we had a boy made of fur and love.

A few weeks ago, he stopped being able to go up and down stairs. My Guy and I took turns sleeping in the guest room with our boy so he could more easily go outside a few times a night. 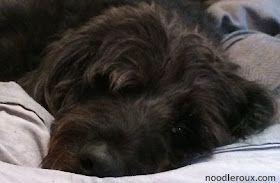 It was the kind of "new normal" that could last a few days or a few months. Except that Big Doodle decided it was done. He failed quickly and died a few days ago.

He was bright-eyed and full of joy until the end. Our hearts hurt, but we know it was time.

Lil' Frankfurter gets it and is understandably needy. No one is going to the bathroom without his supervision right now - he refuses to be alone.
I get it.

It's a bittersweet time. I feel privileged and blessed to have had such an amazing dog in my life. He was the special friend of many neighborhood kids and was known to lick a random baby in a stroller while we were out for a walk. I have uttered the words, "Can my dog see your baby?" because he was so drawn to small folks.
Our vet said Big Doodle was quite literally the nicest dog she'd ever met.
Me, too.

I'm glad he's at rest. But my heart is a little bit broken. I'm so thankful I got to be his mom.